SkyWatch is a non-profit organization started by Amelia Mason, a reputable and licensed wildlife rehabilitator. She maintains a close working relationship with local veterinarians, animal control, humane society, and the National Wildlife Rehabilitation Association (NWRA). She focuses on the rescue of injured wild birds in and around Wilmington and southeast North Carolina. She, along with a small team of dedicated volunteers, rescues all of the injured, orphaned and misplaced birds in our area.

From the smallest hummingbird to the giant pelican, no bird in need is ever turned away. Birds receive medical care, food, safe housing and rehabilitation until they can be returned back to the wild for “a chance to soar once more”.  Domestic and exotic birds receive permanent safe sanctuary at SkyWatch, for a chance to retire into peaceful lives.

Amelia Mason, founder and director of SkyWatch Bird Rescue, is a federally licensed wildlife rehabilitator. As a child she grew up in South Africa and spent much of her time in the Kruger National Park, the largest wild game preservation in the world, where her mother managed the park’s private airport.

Growing up in Africa, she was always surrounded by wild animals. Friends and family were game rangers, wild game vets, trackers and other wildlife experts. Living in Africa on the game preserve and being involved with animals all the time, she gained experience from a very early age. School vacations were spent at the Pretoria Zoo, taking zoological classes and helping zoo caretakers tend to the animals and exhibits.  After high school she spent one year working in the Golden Gate National Park in the mountains of South Africa

Amelia came to the United States at age 19 and traveled across the US, living in places like Kauaii, Arizona, New York, Connecticut, and Oregon. She speaks 4 languages so she then started a career as an International flight attendant for American Airlines, first based out of Chicago and later on Miami International. After 7 years with the airlines her and husband decided to make a change from Miami with their new born child and take a job promotion to Charlotte NC.

Amelia became a volunteer for a waterfowl rescue where she learned that wildlife rescue in the states is  not funded by tax payer dollars. This inspired her to help birds and after years of volunteering, mentoring, along with many avian classes & courses Amelia obtained her state and federal permits as  a wildlife rehabilitator, as well as obtained wildlife educational permits. She has been living in Wilmington NC since 2008 and launched Skywatch officially in 2010.
Rehabbing home base while looking for the right piece of land, Amelia and her husband Charles finally purchased an old flower farm in 2014 and started the Skywatch sanctuary. Skywatch is now a 10 acre Bird sanctuary with an on-site avian clinic that rescues between 2000-3000 birds a year, and is the official go-to vendor for the county’s sheriff’s department and local wildlife officers for bird related matters. 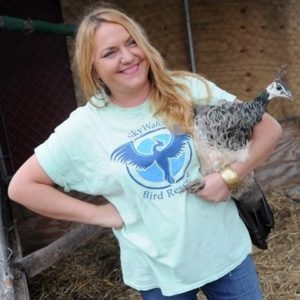 SkyWatch participates in a variety of local events to raise funds and awareness for animal rescue.
View Events

SkyWatch offers a variety of educational materials suitable for use in the classroom.
Learn more about what we do.