to giving each bird a chance to soar once more.

Our daily mission is to provide immediate response to injured wildlife in Wilmington, NC and surrounding areas.

At this time we offer certain on-site educational programs which can be booked through our director; we also offer off-site programs for larger groups.  Kids will love their experience which promotes age appropriate learning and awareness. We also offer volunteer training in “capturing and handling” and “bird transport.”  Please call for details.

Our ongoing work includes active intake of migratory and non-migratory birds with a focus on rehabilitation and release back into the wild.

Our main goal at SkyWatch Bird Rescue is to rehabilitate and release injured birds back into the wild. But we also focus on building and maintaining a lifelong sanctuary for our non-releasable patients.

Our mission at SkyWatch Bird Rescue is to raise public awareness through education and to promote preservation and conservation.

SkyWatch Bird Rescue reaches deep into the community to help both people and birds. We are a free resource for the community with whom we share both wildlife awareness and provide a service. 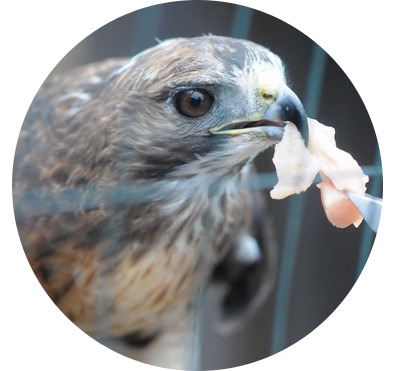 After building some enclosures and getting federal permits from the Fish & Wildlife, our first year we took in 350 birds, the second 500, the third 600. Each year more and people would call us for help when they came accross injured birds. In 2017 we had a record breaking number of intake patients of close to 3000. The more people found out about us, the more the call for help grew and grew and it became quite overwhelming since we take no salary or have any paid staff. “It got to a point,” says founder Amelia Mason, “where I thought, I can either get out of this and go back to living a normal life, or I can rally even more volunteers, and really commit to growing the organization as a permanent and impactful facility to benefit both people and Birds”

So she and her husband went all in. In 2014 they moved from Wilmington to Castle Hayne to a 10 acre spread of land they purchased. It used to be an old flower farm established by one of the original european settler families who began flower farming in the area in the 1920s.

The goal is to continue to grow and expand our Avian Clinic with Aviaries and to expand until all 10 acres is open to the public in a bird-centric zoo fashion, with the difference being that unlike a zoo, every single Bird here is a rescue. No birds are bred, bought or sold. The sanctuary is filled with all rescued birds saved from injury, illness or misplacement. Besides the resident birds that live here the sanctuary also attracts a myriad of wild birds who visit daily.

“95% of birds that come in are here for man-made reasons” Says Mason. ” Birds come in due to things like; fish hooks injuries, dog or cat attacks, hitting windows, being shot or poisoned, misplaced due to habitat destruction, and more. We as humans are hurting them, I feel like it’s our responsibility as humans to help them. The city, state and government does not fund or facilitate care for injured or orphaned wild birds, even if it was done by someone intentionally. It’s up to all animal lovers (working with licensed facilities) to step up and give relief to those animals for the suffering they endured at the hands of other humans.

Educational Resources: Click to view each flier at full size

Visit our blog for more

Have you found a baby bird?

How can you help birds?

Hunters! You can help

Are you a friend of SkyWatch?

If your business is interested in donating or partnering with SkyWatch Bird Rescue, we’d love to hear from you!